Projet recap after 1+ year of writing 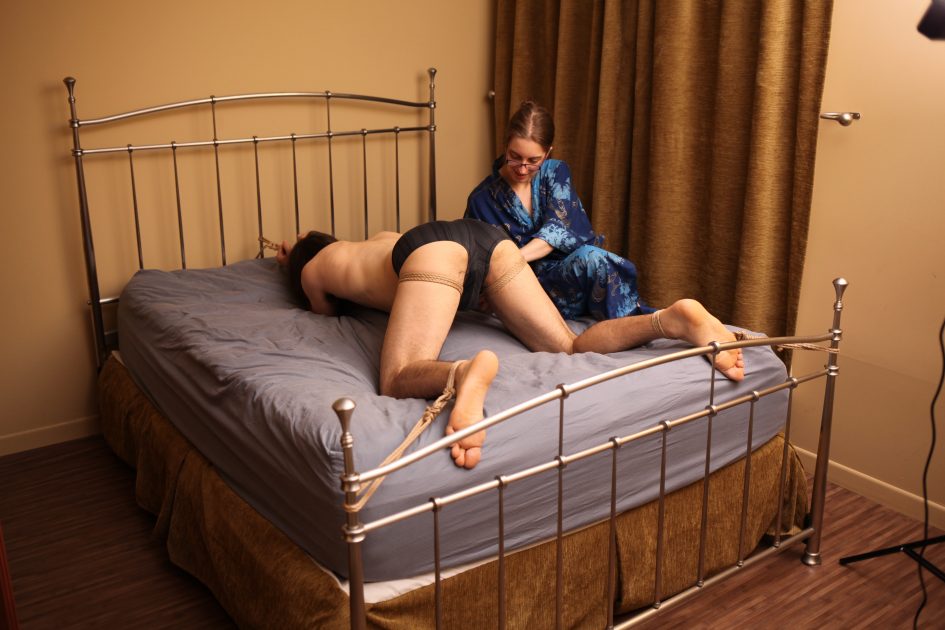 Test shot while tying for the chapter "The Bed"

It feels like my brain is constantly working on the book, I’m watching something on netflix and then I have to stop and take a note of something to add to a chapter. It’s progressing well, I was hoping to be further along at this point, but the reality is that the project keeps getting bigger (and better) with time. I don’t want to let this go forever, and I’m starting to narrow things down, and the path to completion is getting more clear.

As suggested by a friend, I’m taking the time to document the project. I understand why it’s important, and at the same time, my brain just want to keep on writing the book itself!!! So here is an overdue status update.

Vision and where things are at now

What has changed is that each of the 365 items have evolved from “fun things to try” to “exploration of a concept or techniques”. Which means that each day has challenges, and several things to try. It makes everything much deeper for sure but also requires a lot more thinking and research. The contributions from many different perspectives is slowly turning the whole thing into an encyclopedia, while still fitting in the 7 activities per topic limit.

Spring is really starting to shape up, the goal for each week is described, and the vast majority of the activities have been detailed. For each, there is (or will be) a description of the concept, a “Practice time!” section with ideas to try, a “Being tied” section with bottoming tips. Many have advices, quotes or short tutorials on top of that.

Summer, fall and winter have had some research done, but almost nothing is fleshed out. The only chapters that are detailed are the one that used to be in Spring and ended up being moved.

The web site is only a backbone at the moment, but the getting started section is starting to shape up. I expect to add a page for each week when I start the focus test.

Timeline, what was done so far

It was right before going away for the christmas break that I had the idea of making a 365 days of rope program/book. On that day I told myself that if I could list enough ideas, it would be worthwhile, Before the day was over, I had listed over 200 ideas, there was clearly something there, but it wasn’t clear how to organize it. It was clear that I didn’t want to write a book about suspension, but I still considered partial at that point.

I spent a week with Bendy_Dude in Mtl and he brought up that I should aim for 52 stronger concepts. From there things were more clear and I started reorganizing the ideas into 52 chapters.

Mademoiselle Mai, a close friend, quickly offered to collaborate for the graphic design part of the project. We studied the existent bondage books, I own a lot of tutorial books. We came up with the square structure of the presentation and evaluating the size of everything, and the need to split the project in four seasons to make them a reasonable size.

From there I did a couple of skype sessions with a few veterans rope teachers and asked them a bunch of questions. This allowed to shuffle the ideas around until the the purpose of each season became clear. Spring would be the classics, Summer would be the variety of body positions, Fall the technical, Winter the exploration and darker side of rope.

At that point the vision was more clear and the first few chapters of the book had already started taking shape. From there a lot of questions arose, which single column tie to start with? Which bundling method to show first?

We had lots of traveling planned in that season, and I spent a lot of time talking about the project with different people about it via Skype and at events like BED, BiB and BeachBind. The book became a great excuse to ask beginner questions to experienced teachers and understand why they teach what in which order. People were very enthusiastic about the project.

Pedro’s workshop in Montreal about body positioning was eye opening. Once I got back home, I completely restructured the second book, and things were making much more sense now. Book 1 was also quite structured at that point, while 3 and 4 were just a spreadsheet.

The place of partial suspension was only the last chapter at that point. After a photoshoot with Nathaniel Flumen, I realized the complexity and the difficulty of explaining the risk level of certain ties, and decided to cut it completely. Or rather, postpone that content to another series of book… later 🙂

Work got quite crazy, and my progress on the book slowed down a lot. I still managed to get a few things done such as the web site, document structure for book 3-4, research through people’s profile for different styles, make a few photographs and the very first mock-ups of the tutorials. This really helped strengthening the vision. 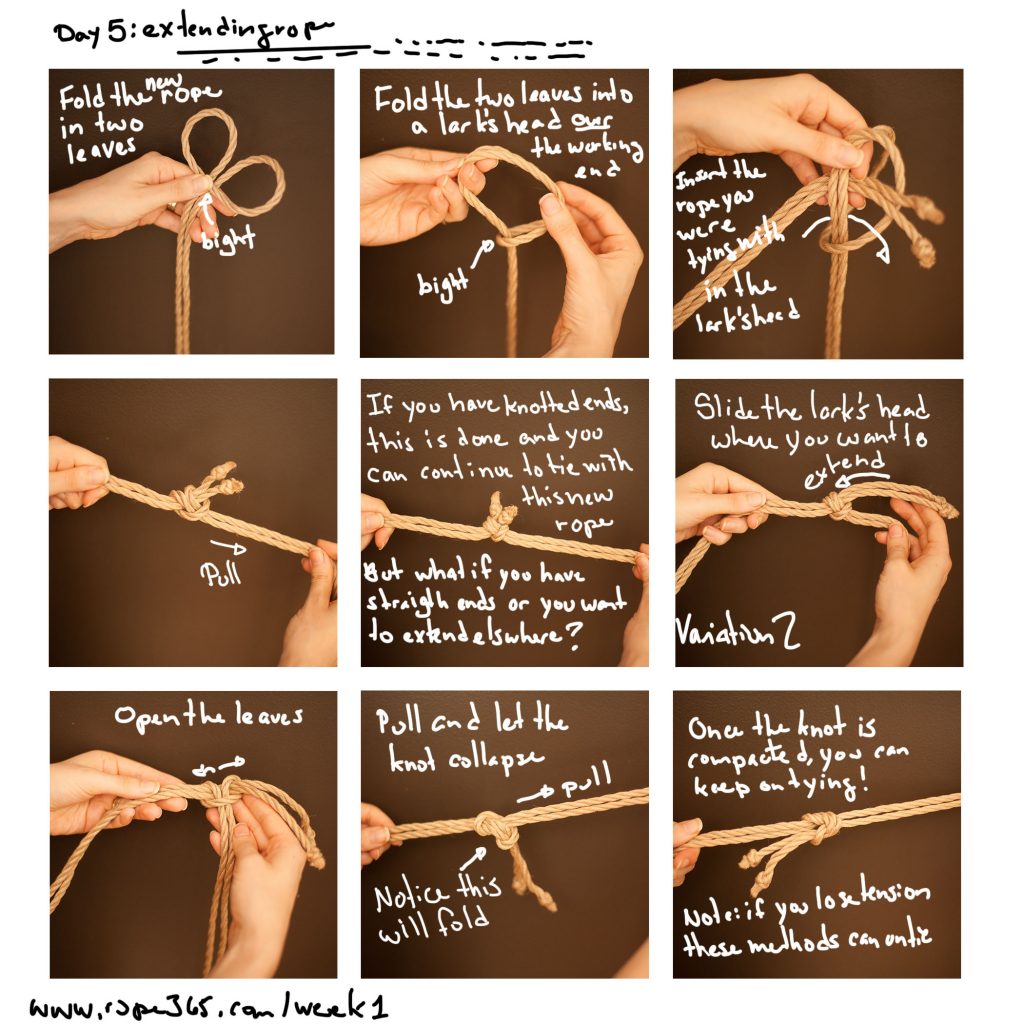 Early prototype of tutorial. Proof of concept. Pictures by Alexk7, hands and rope by Ebi McKnotty

Meanwhile, the discussion from the previous season had got a few people inspired about contributing. We discovered some cool feature to collaborate on google docs and a few people started writing. Sansblague from Sweden suggested having bottoming tips for every activities, something I didn’t considered because I didn’t though it was possible, until they proved me wrong! AndyBuru and ButterflyBondage also made a bunch of contributions. With everything they were writing, I was learning something.

At some point it became harder to encourage people to make more contribution as I needed to make substantial improvements to the document, and just make some progress on my end. Work inhibiting that, progress was slow.

One of the major hurdle to making a lot of tutorials was making the photography more standardized. I started researching and building a room in my house dedicated to rope with lots of helps from crafty friends and partners.

The situation at work just got worst and worst. But I did get to go to (co-organize) NARIX and pitch the project to a few more people. I also got to listen to a lot of people opinion about rope community, and hear about different approaches and a ton of cool ideas. I left with a lot of homeworks.

I started working on waivers and contracts. By the end of fall, I finally had a room in my house ready for photography with lots of space, lighting equipment and a nice backdrop.

My two weeks of vacations for Christmas were the time to start getting the machine rolling again. I met with a lawyer to double check my waivers, had friends come over to do some photography and spend a lot of time writing. Digging in the NARIX experience, I wend into a major re-structuration of the chapters and finally had a solid backbone for book 3 and 4. I start questioning a bunch of things such as “how should I name the book”.

A few weeks later was time for another important step in my rope journey, a first trip to Japan. I learned a lot, observed the culture by myself which demystifed a bunch of things, and talked about the project to a few people. The enthusiasm about it was great, and I got some great tips and pointers. The conclusion being that I’m on the right track, but I need to go back to connect with other people to discover more things.

I basically spend the whole season living in my suitcase with Montreal NDC becoming even bigger, Fuoco’s workshop in Montreal and BeachBind in Jamaica. Compared to last year BeachBind, I managed to have more specific conversations such as discussing bottoming education with Clover, technique drills with Wykd_Dave, and printing and crowdfunding with Lee Harrington.

I was spending a lot of my time in the plane writing, but I was taking more notes from my learning experience than I managed to actually write down in the book document.

The traveling was not over, as I went to Toronto for Pedro’s workshop, then hosted him for the Quebec workshop, and then nawashi Kanna and Kagura in Quebec, and attending their workshop in Montreal.

The workshop with Pedro was the continuation of last year’s body position study, including floorwork, partial and suspension. It became clear at that point that at there will need to be book 5-8 with partial and suspension, year 2. It’s a such a temptation to work on this as well, but I need to focus on 1-4.

I’m coming to an end of a learning cycle, and the backlog of things I need to do for the book is quite huge. I’m not planning anything else for the summer so I can refocus on writing.