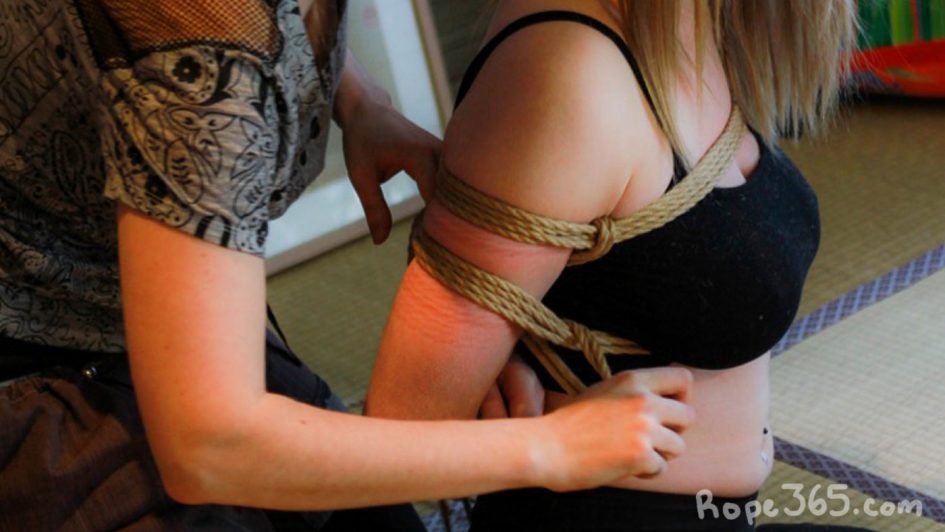 Learn your first box tie pattern or get tips to improve the one you’ve been using for a while. The seven activities aim is to create a journey to (re)discover the classic tie and some more exotic variations.

History of a chapter

This was over five years ago, we were at the original location of the Toronto Kinbaku Salon on Queen. A bunch of us were watching a new box tie tutorial that someone had just uploaded. The group was crucifying every details of that video, the tension was wrong, the frictions were not efficient, the extensions were in bad spots. I remember telling myself that I would never be good enough to make a tutorial for the box tie, that teaching 1-1 might be ok one day, but putting something online was just plain dangerous, to the world and to my reputation. And here I am, facing my fear, and actually posting one.

No matter if we like it or not, the importance of that tie in the history of rope bondage can’t be denied. And to do honour to it is one of the greatest challenge. Nothing can be compromised, the execution of the tie, the safety aspect of it, it’s history. As Spring aim to explore the classic, there is no escape when it comes to the most classic tie.

The biggest challenge to tackle remains it’s diversity. How does one chose among the many variations? How do we showcase that diversity? I studied that tie in numerous ways, taking many classes in different styles, getting deeper with specific designs, bookmarking pictures and tutorials, online and in books. Trying to find what were the recurring patterns?

After long deliberations, I decided to settle to a simplified version of the box tie where most of the elements are present in different styles. During my trip to Japan in 2017, I showed Nawashi Kanna a picture of the tie I wanted to break down in steps for the book. I asked Kanna sensei who should I credit for that type of design and who should I ask for permission (with the translation help from Kagura). Kanna immediately replied “Akechi Denki”,  Nawashi Kanna’s sensei. But then, how does one ask for permission when the creator is dead? Kanna looked at me and said “You have permission”. This was such a relief, for the first time I felt a bit of confidence writing this chapter.

The first drafts of the tutorials were overly complicated and difficult to follow. It took several iterations to come up with the current one that uses 3 different colours of ropes and a checklist to evaluate the tie. I’m still unsure of the quality of the current version, some of frictions and tension are not as good as I would like them to be. I’m unsure if I can tie that much better in a context where we stop to take pictures all the time. It will be good enough for now!

At that point, I only had the first two activities confirmed. The huge amount of diversity makes it clear that two weeks/chapters will be needed to cover the whole spectrum of tie designs, one for the core foundation, another for the variants. Over a week-end, I tied every variation I knew, took pictures of them and made a document listing the candidate for spring vs summer. After discussions with many friends it became clear that what should be in Spring are the concepts that are present in many styles. More research followed, if something is present in 2-3 different styles and/or, if I can find a ton of pictures online, it’s probably part of the core curriculum. I wanted to show one third rope design in Spring and keep the other for Summer, V third rope made the cut, with the mount fuji coming as a close second.

I am so grateful for beachbind this year and the many people who were generous with their time and their art and their heart. I asked Mynx if she would like to participate and showcase the 1-2-3 ropes versions of her interpretation of the box tie. I was particularly excited because her inspirations and style are quite different from mine. I’m also grateful for BOP joining and bringing her lovely energy to the project. My first conversation with Mynx, backstage of MBE many years ago, was about the lack of ressources for building blocks. We discussed back then the possibility of creating a video or something for this. I’m so honoured to have her part of the project now that this early idea is becoming a reality.

Sometimes between 2015-2017 I started noticing a rise in the popularity of high hands box tie. Especially with the influence of Naka Akira rising outside of Japan. Since so few people can actually do that position, I didn’t want to create a chapter that has limited accessibility. Interestingly enough, it was at that same time that I took a few classes inspired by the work of Yukimura Haruki that tied the hands low. Combining those two topics was the perfect fit. I never got to learn from Yukimura before he passed away but I still consider he influenced my style a lot through my teachers and friends who studied with him, through his DVD and books. We went to his house while in Japan and it was an interesting moment of prayer and respect, looking at the kanji of his name on the door sign, removed but still visible.

Next came the diamond structure box tie. For this one I had the feedback that it was a difficult tie for someone early in their journey. And after thinking about it, I think it’s great to tackle complex patterns. I remember how excited we were after learning this at shibaricon and labbing this with our friends when we got back home. I want to bring this excitement to the new people too.

The cuff structure was another audacious choice. This one is really difficult to execute. At the same time, the cuff present an interesting look into the history of the tie and can be mixed in different ways that are more accessible. It is difficult to find information about the tie safety. In theory the tie sound more dangerous than a regular box tie but I have yet to find a story of injury using those techniques. Is it because it is less popular? Tied by more advanced people? That people are more careful with it because it looks more dangerous? Probably all of those. I just pray that it will keep on being used safely.

The last activity to make it’s way in Spring was the kimono tie or tasuki. The final research sprint made me realize that this structure is present in most style. I first learned it from OsakaDan who teaches Kazami Ranki style, and later learned many variations of it. Kanna’s version with the knot close yo the neck is a personal favorite but I chose to keep that variation for more advanced discussions.

The good thing with having a deadline is that it forces me to post this now, otherwise I would never feel ready, I wouldn’t have crunched all week-end to get the pictures edited before my trip to Los Angeles. And now it is free and I look forward how people will react to it.

The good thing about a web site is that I can continue to add and edit. There are a few concepts I did not have the time to photograph and I plan on adding these in the next few weeks. There is also a biggest quest in the horizon, I’d like to travel and photograph the interpretation of tie by different masters like we did with Mynx’s. Documenting the different styles. That may be the kind of content that will be exclusive to the printed book.

I hope the collected pieces of knowledge assembled in this chapter will bring much enjoyment and I look forward hearing your stories and ideas.