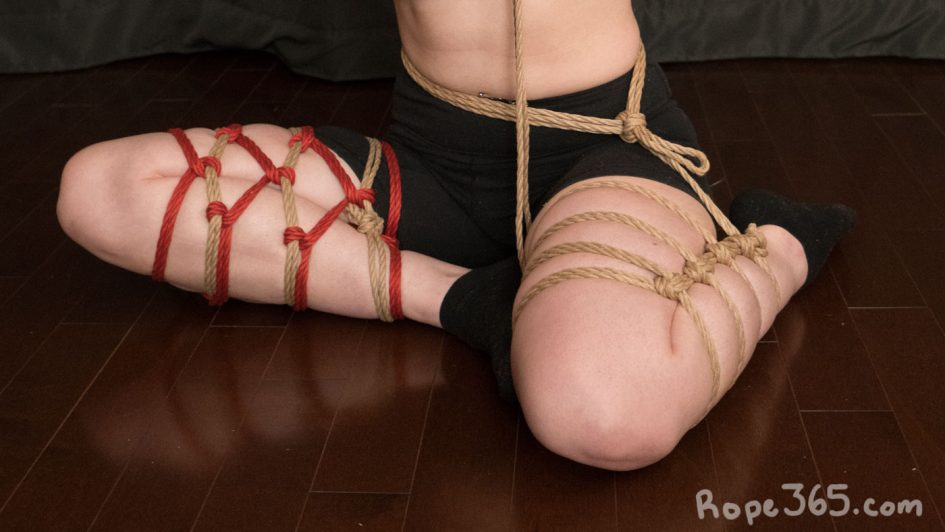 This fourth week takes us on an exploration of ties that keep the limbs in a bent position. The variation on the leg is often called futomomo shibari 太腿縛り (thigh tie) or futo 太 (fat) for short. Different patterns and techniques, on the leg, on the arms, and combining those ties into more complex position.

The story behind the “Frog Tie” chapter

This chapter, along The Chest and The Box Tie, was among the firsts to make the list. It used to be the first full tie, before The Chest chapter. The reason was that frog ties are easier to tie and practice on yourself. As both of them developed, it became apparent that the exercises of the frog tie week were more difficult to execute. “The Chest” was also a great chapter to build some of the concepts that would be useful for this one.

The name itself changed quite a few time. It was first named “Futomomo Shibari”, which is still how I refer to it sometimes in discussions. Then I added the variation on the arm, and also decided not to use Japanese name for chapter titles. For a very long time it was called “Bend Limb Ties”, which doesn’t sound sexy at all. It was during research of video tutorials that I found several references of people calling these ties “Frog tie”, especially in American bondage videos and on gay bondage web site. And that clicked. Some may argue this name is rarely used on the arm, but it’s not incorrect either.

The spiral frog tie tutorial was one of the earlier prototype I worked on in August 2016, right after the single column tie. Then the chicken wing was some of my earlier tutorial exploration I tried with Nate in 2017. For a long time I wasn’t sure how to split the topics, and it was only after extensive research and exploration that it really came together. The spiral was definitely going to be the beginning, it was combined and split from the wrap based variation several times. I’m happy with the cinch one, I wasn’t sure at first, but now that it is written, I really feel this is a challenge interesting enough to stand on it’s own. Different starting point was also one of the first topic to make the list, but it wasn’t always clear where it should sit in the progression.

It’s funny that my two favorite activities are the ones that I had never tried before. I had seen many pictures of diamond pattern frog ties in the early research, but never actually tried it myself. I had a few design in mind that I wanted to try but it took a long time before I actually tried. Two weeks ago, I sat down and tried to do some on my own leg, if one was very successful, the other attempts were just too difficult to design on myself. Then my husband volunteered and I tried making diamond with consecutive Xs. This was interesting as I found a way to have the X on both sides. Then it was difficult to figure out how to finish the tie, I ended up leveraging the gap and cinching with the rest of the rope to make it more solid. The next day, I tried the spiral diamond pattern on Miss_Soffia, that third exploration was mind blowing. After a few attempts. the tie that emerged was the most beautiful leg tie I had ever tied. It was also surprisingly solid when working with it in suspension afterward.

My favorite of the seven activities is definitely the last one. I had combined different ties before, but actually taking the time to tie the two legs and the two arms and spending the time to study the different possibilities for an extended period of time was something new for me. And what a night this was. making a tie, taking a step back, moving her in a different pose, taking a pictures, listening to her suggestions, trying, taking a step back. It was a constant feeling of novelty and inspiration. “I feel so beautiful’ she said as her body was being twisted with her hair tumbling on a ground in a beautiful waterfall. This moment of collaborative creativity is at the very core of why I tie.

I hope this fourth week will bring you as much enlightenment as it brought me writing it.

If I was wrong to think that the frog tie would be easy to write, I stil managed to finish it in 3 weeks, which is about half of what it took me to write the previous ones. Less traveling definitely helped on this. Writing the summaries for Summer requires more work than the previous ones, but the research and study to write these has been some of my favorite rope learnings of this rope journey. Writing the next chapter about the box tie (ushiro takate kote shibari, aka TK) will present a new level of challenges. There is so many traditions around this tie, the amount of work required to do the work that this tie deserves is yet to be discovered. I guess we’ll see in a month what this looks like!