ideas to learn and practice every day 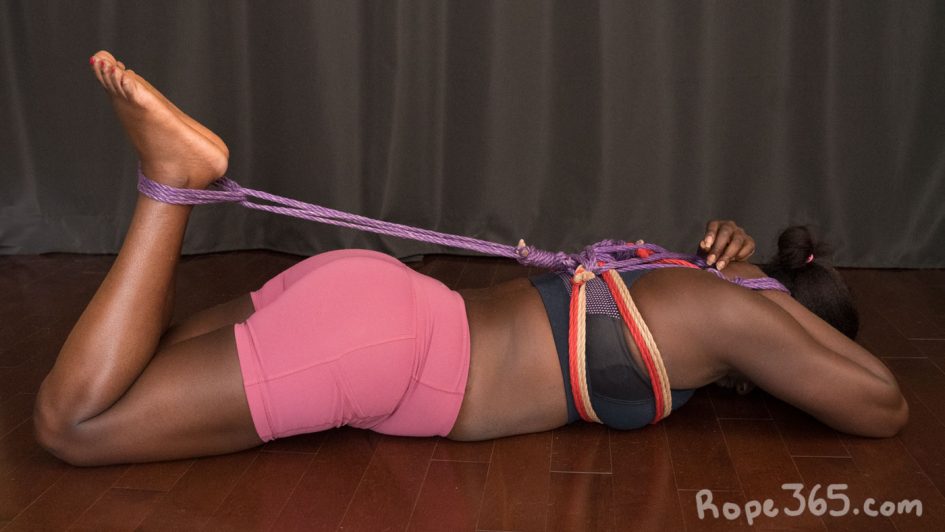 The hogtie is a position in which all four limbs are tied together in the back. It was named after a techniques to tie pigs to make them helpless. It is an efficient way to bind someone in a restrictive position. We can find references to hogties in most cultures: martial art, law enforcement, damsel in distress pin-ups, etc. Japaneses call it gyaku ebi shibari 逆海老縛り (reverse shrimp tie). Different variations of the tie have a wide range of complexity, from minimalist to combining several tie design together.

History of a Chapter

It was pretty clear from the start that the hogtie was going to be part of Spring, and that it would be the first full body tie of the project. It’s such a classic with a high presence in both Japanese bondage and damsel in distress styles. What was more difficult was how to divide it in seven activities.

The first hog tie photoshoot we did was with Nathaniel Flumen at the end of 2016. These are probably the oldest shots that I have decided to keep, unlike the foundation and frog tie prototype that I ended up completely redoing. Nate’s underwear always make me smile.

I wasn’t stressed about this chapter as I was with the previous ones. It’s a pretty straightforward subject that focus on reusing a lot of the techniques of the previous chapters. I ended up just tying as many as I could to have different variations. And that will probably be good for now. I would definitely like to have even more examples for the final book.

The last day about flipping in hog tie is interesting. It started with the self-tying challenge that Bendy_Dude and I had in 2013. We would tie ourselves and send each other pictures. He did this picture where his body was pinning down his arm by flipping over it. It looked really constraining, and all you had to do to release is flip back on your belly. The next morning I was in my living room while everyone was sleeping trying to find ways to play with this, tying myself up and flipping around. This was the first of many experiment that ended up with the two exemple showcased.

In 2018, I traveled to Los Angeles last minute for work and ended up having to stay over the week-end while all my friends already had plans. That’s when I connected with luluXSparkle, that I had met at a previous party at Threshold. We did this fun photoshoot in my hotel room, flipping her on the bed, it was pretty cool.

To be completely honest, I have been very tired and much less inspired lately. I don’t feel like the hogtie is the strongchapter, but it’s still a good one. I feel I will need to come back to it for polish. It’s very hard to keep the pace of the deadlines, especially when that deadline is self-imposed. I’m not giving up. The chapters ahead will be more focused on soft skills and less on pattern which will be a different challenge. As always, if you read up to here, you probably care, send me your feedback and let’s make this project event better together!

Follow us on social media to get the latest updates