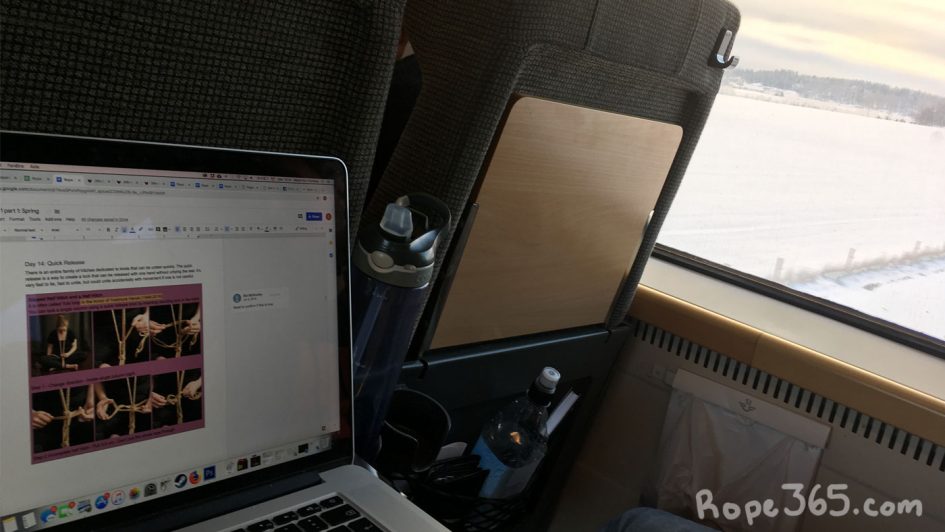 The seven activities for week 2 are now available!

This chapter covers seven basic hitches and how to use them to unleash your creativity while drilling and mastering the technique.

Try it and share your experience and discoveries! Let us know if you have feedback as well.

Meanwhile I try to keep up with adding the weekly exercises summary every week. We now have 8 weeks fully listed.

Next stop is The Chest to be published in March 2019. We’ll combine these techniques to create different chest structure with different intents and aesthetic.

The journey of week 2

The genesis of the hitches chapter is April 2014. I had the honor to be invited to teach at Ropemix in New York by VanessaVeronique. This was my first teaching experience outside of Canada and I was very excited for it. This was a key moment in my rope journey as many of the people I met that week-end grew to be close friends and I learned a lot from them.

In particular a class with Pedro Cordas completely changed my view of rope tying and teaching. It was a very simple exercise: “every time two ropes crosses do a Munter hitch” (here listed as crossing hitch see Naming Things). The demo by Pedro and VanessaVeronique was very powerful, simple flow tie slowly becoming a complex pattern, evolving into an epic suspension.

When I tried the exercise myself, I was amazed that I was unleashing my creativity and drilling a technique at the same time and, because of the simplicity of the tie, I was able to stay connected with my partner. Repeating the exercise was also fun because it was always different. That tie is still today one of my favorite to play with.

As I took many other classes with Pedro my teaching style evolved to be more hand-on exercise rather than following step by step. Rope 365 was still very barebone at that time and both my classes and my writing were evolving in tandem. The hitch chapter and the “hitches and creativity” class were born around the same time.

I started searching for similar ideas to the “Munter exercise”, what else could be buillt with the the same technique over and over? The zig zag strappado came from an exploration with half hitches with Nate, the cow hitch was first designed on a mannequin. Research on dreamcatchers spawned the idea of the leg dreamcatcher.

It became apparent that there were more than 7 hitches that could be interesting to study. It was easy to decide to split then in two, essential ones in Spring and more obscures ones in Fall. Many bounced back and forth between the two. At some point it was hitches and knots, and then more chapter shuffled resulted in what we have today. Seven hitches that I use on a regular basis, an extension of the building blocks of week 1.

The creativity aspect is also very important. It’s not just about knowing a knot, but more as having a tool to create something. Each activities had to focus on what you can do with the hitch, more than how to tie the hitch itself.

Receiving the Ashely Book of Knot challenged a bunch of things in my mind, but the chapter also got stronger thanks to it. I started asking twitter and fetlife to validate a bunch of things. It ended up being a bit draining to constantly challenge every word, at some point I decided to move forward and accept I might have to come back and fix a few things later on after getting peer feedback.

I tried to shot everything before leaving for our 10th wedding anniversary trip. Early January was a sprint. And then, somewhere on the road between Reykjavic and Copenhagen, I made the decision to punt one of the activity to bring back the clove hitch. Now publication had to wait our return to Canada so I can shoot a few more pictures. I still managed to finish most of content while in Sweden.

The trip was also great to connect and reconnect with old friends and new rope people. Showing the book draft, getting some feedback, getting inspired by everyone’s work.

I hope you will all enjoy week 2, it will probably be one of the chapter with the most meat in it of the whole project. I hope it will allow many others to unleash their creativity just like writing it allowed me to push myself.